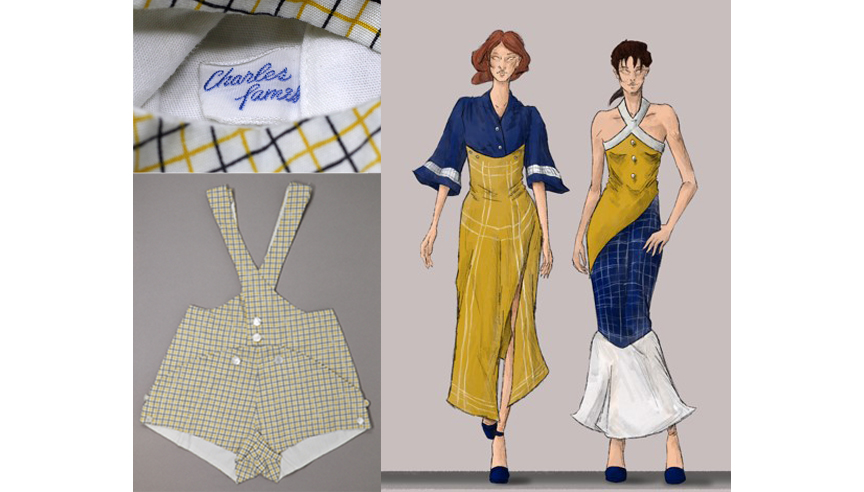 Student bio: Terrance Bridges
I’m currently a rising junior studying fashion design. I was born into a family of artists and grew up drawing my favorite comic book and tv show characters. However, as I grew older I fell in love with abstract art as well as fashion. I was fascinated with merging the art and fashion worlds- the idea of designing garments as if they were a canvas. Now that I’m in college, I’m continuing to push my artistry through fashion and graphic design. Here’s a link to my portfolio: https://www.behance.net/terrencebridges

This study examines a yellow plaid jumper, accession number 2005.3.23. Its one-piece construction, crossing straps, and use of buttons are some of its standout features.  The tags and the designer of the garment suggest a date within the 1950’s.  The jumper shows some wear and damage in small areas, but the overall integrity of the garment remains. This jumper was designed by Charles James and manufactured by Alexis as a part of a collection for Lord & Taylor’s 5th Avenue Department Store. The original wearer of the jumper was a young boy by the name of Dermot Chickering Murphy.

There are no side seams on the jumper. Two pieces are sewn at the center back, wrap around to the front, and attach with two pearlescent buttons. These two pieces have a convex shape at the front, leaving room for a third piece to connect. This third, arch-like piece attaches at the bottom of the back piece, and wraps around to the front, connecting to the top convex edge through hidden snaps. Four of these snaps fasten at the front, and one fastens on either side above the hem. These hidden snaps function as the closure points of the garment.

The back waist is gathered with elastic on the inside, which allows the wearer to get in easily and keeps the garment snug. From the back waist, the top piece wraps around the side and curves upward as it comes across to the front, covering the wearer’s chest. At the top of this piece are straps on either side. These front straps come over the shoulder and attach to two straps that attach to the center back waist.  The back straps have pearlescent buttons at their ends, while the front straps have buttonholes at theirs.

Children’s wear in the mid-20th century was in a sense an echo of the men’s and women’s wear of the time. Boys wore “belted jackets… cotton knit pullovers with napped under surfaces…cardigans, and sleeveless pullovers” (Tortora). Boys and girls also wore sailor suits and dresses and even some military and nurse uniforms (respectively) during the war years.

Children’s wear had become miniature forms of adult wear, keeping many of the same structural elements.  With this in mind, this Charles James jumper is quite interesting and its construction allows it to stand out amongst many others. There is a sense of elegance and artistry with the mathematical patterns that present themselves as organic. The subtle curves that lead from the side and into an open back use negative space to its advantage, creating a visually “free” and mobile silhouette, which is optimal for a child wearing this jumper.

These design elements also indicate the price of the jumper. This was an expensive garment.  Not only was it sold at a Lord & Taylor’s, a high end department store, but it was likely much more expensive to create because of its complex pattern pieces.  This speaks volumes about the designer, Charles James. James was predominantly known for his women’s dresses that emphasized the female body. However, in the spring of 1956, James was expecting his first-born child.  This children’s wear collection focused on the needs of active children and their caretakers.

At left: Charles James pins a suit on a model, possibly Ricki Van Dusen, 1948. (photo from The Art Of A Lost American Couturier, On Display At The Met)

The jumper is visually simple, but also complex and abstract, both in its artistry and in functionality.  It echoes the elegance of James’ womenswear in a small, compact, yet freeing children’s wear garment. While young Dermot was most likely unaware of his family’s wealth, social class, or outlook on fashion, it is clear that the Murphy family could not only afford such an expensive item, but also evident that fashion and the quality of one’s outward appearance was placed in high regard.

Terrance was inspired to translate the details he observed in the jumper into silhouettes more typical of Charles James’ designs for adult women. 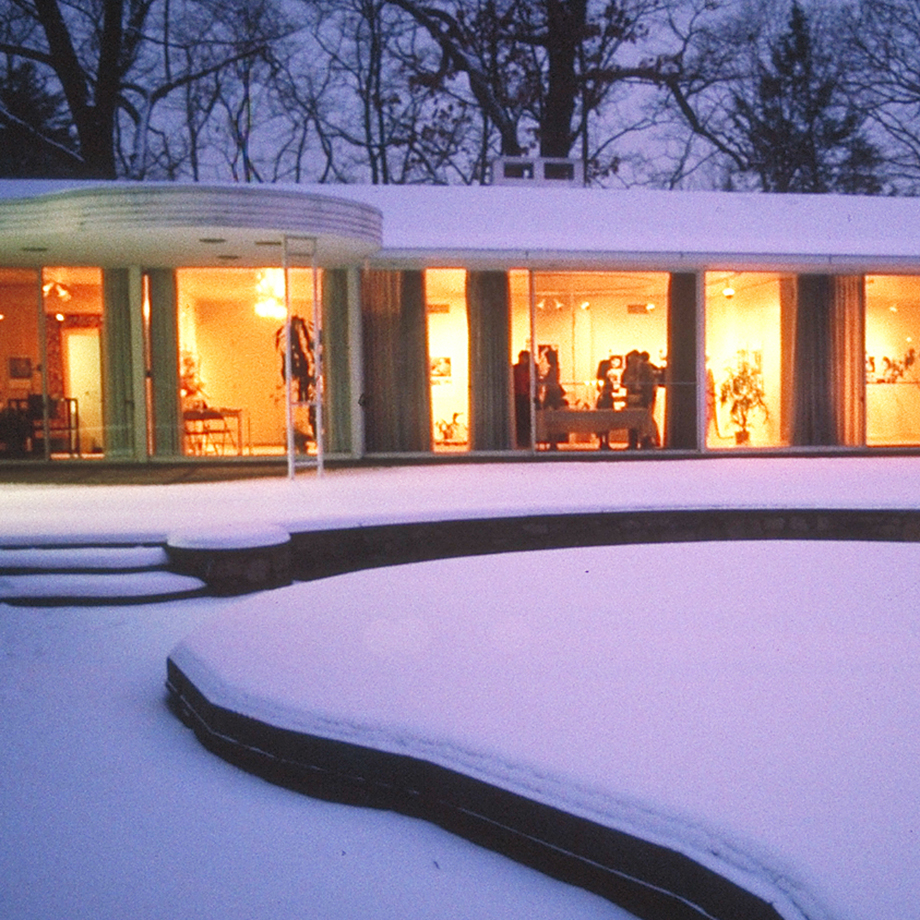 New on the blog: Holiday Hankies! Wishing you & yo

Another superb exhibition in our galleries of the

Wanna know what our dream team of student assistan