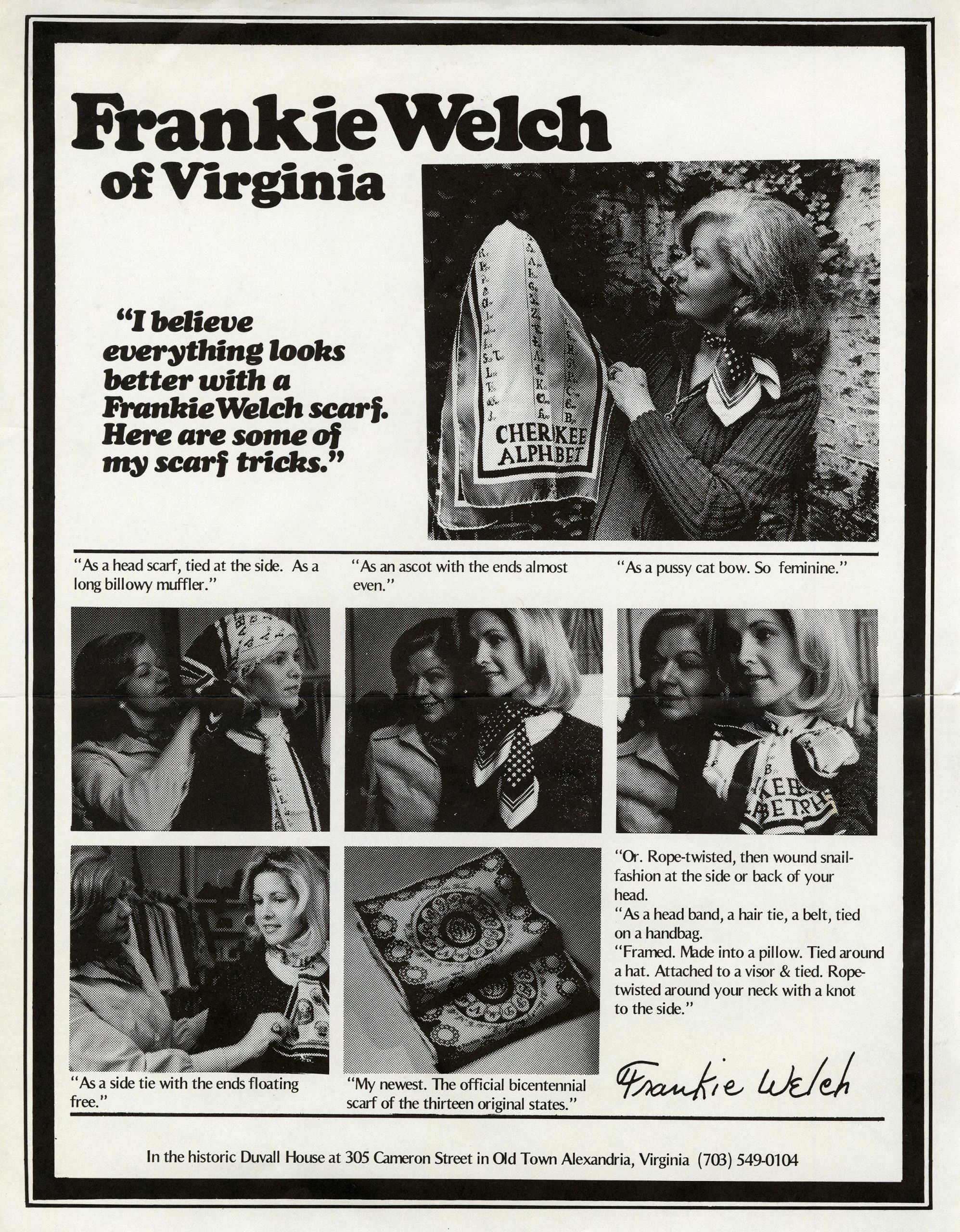 Hello, it’s Gabby again. I wanted to share with everyone a collection I worked with in the spring semester of my freshman year. I was given a box full of objects created by the designer Frankie Welch. I had never heard of her, so I decided to begin this inventory project with some research. I quickly found out she was a designer who focused on creating scarves and handkerchiefs for political figures or their campaigns.

Frankie Welch was born in Rome, Georgia in 1923.  However, she didn’t begin designing until later in life. Welch first worked as a home economics teacher in an elementary school in Wisconsin. She became a sewing instructor after she, her husband, and their young daughter moved to Washington, D.C.  Her boutique, “Frankie Welch of Virginia,” opened in 1963. She focused on designing for 1970s and 1980s politicians and famously created the dress Betty Ford wore to her husband’s inauguration in 1974.

In 1967 she designed her first scarf.  It featured the Cherokee alphabet. She created the designs as part of an initiative for the Native American education service and to give a nod to her Cherokee roots. (Welch is 1/32nd Cherokee.) Not only did she design scarves and handkerchiefs, she created other products. Some other objects I found in the box were paperweights, bracelets, and wall hangings. She also coined the term “napachief.”  In her definition, a napachief is a one-module textile with a design.  Welch’s pieces used silkscreen printing for their patterns. Her design work can be seen in multiple museums, from the Smithsonian to the Chieftains Museum in her hometown.

In addition to research, I inventoried the objects in the collection management software we use at the Design Center, Past Perfect. This program keeps track of objects in the Textile & Costume Collection. For each of the Frankie Welch pieces, I wrote detailed descriptions, including noting colors, designs, patterns, and any inscriptions. Most of the pieces had an original tag with the inscription, “Alexandria, Virginia” which refers to her boutique. I also measured the pieces and made note of what “type” of object it was.  With the help of Collections Assistant Ann Wilson, I took photos and assigned accession numbers to the pieces.  I also made sure each object had a label noting that number to make them trackable within the system. I created labels for any pieces missing one, and then neatly sewed them onto the piece. Lastly, I dated the pieces with most of ours originating in the 1970s and 1980s.

Overall, it was a great experience to be able to work with a designer’s pieces, and learn about Welch. I was introduced to a designer I probably wouldn’t have known otherwise. It was interesting to see the political-themed products she created and the silkscreen patterns she designed. Because of my inventory work and photography, the entire Frankie Welch collection is now available online.  Being introduced to Frankie Welch was enjoyable and being able to analyze her pieces really opened up a new type of design to me.

Independent scholar Ashely Callahan contacted me last year about our Frankie Welch Collection.  Ashely is currently working on a book about Welch and an exhibition at the Hargrett Rare Book & Manuscript Library, University of Georgia Libraries.  Over the course of her research, she came across records indicating that Welch gave a collection of scarves to the Philadelphia College of Textiles and Science (the name of our University at the time) in 1985 and wrote asking if we still held them.  I shared information about our holdings with Ashley and you’re seeing examples of the collection in Gabby’s article above.  Make sure to check out Ashley’s fantastic article, “Frankie Welch: American Fashion Specialist” originally published in Ornament Magazine.