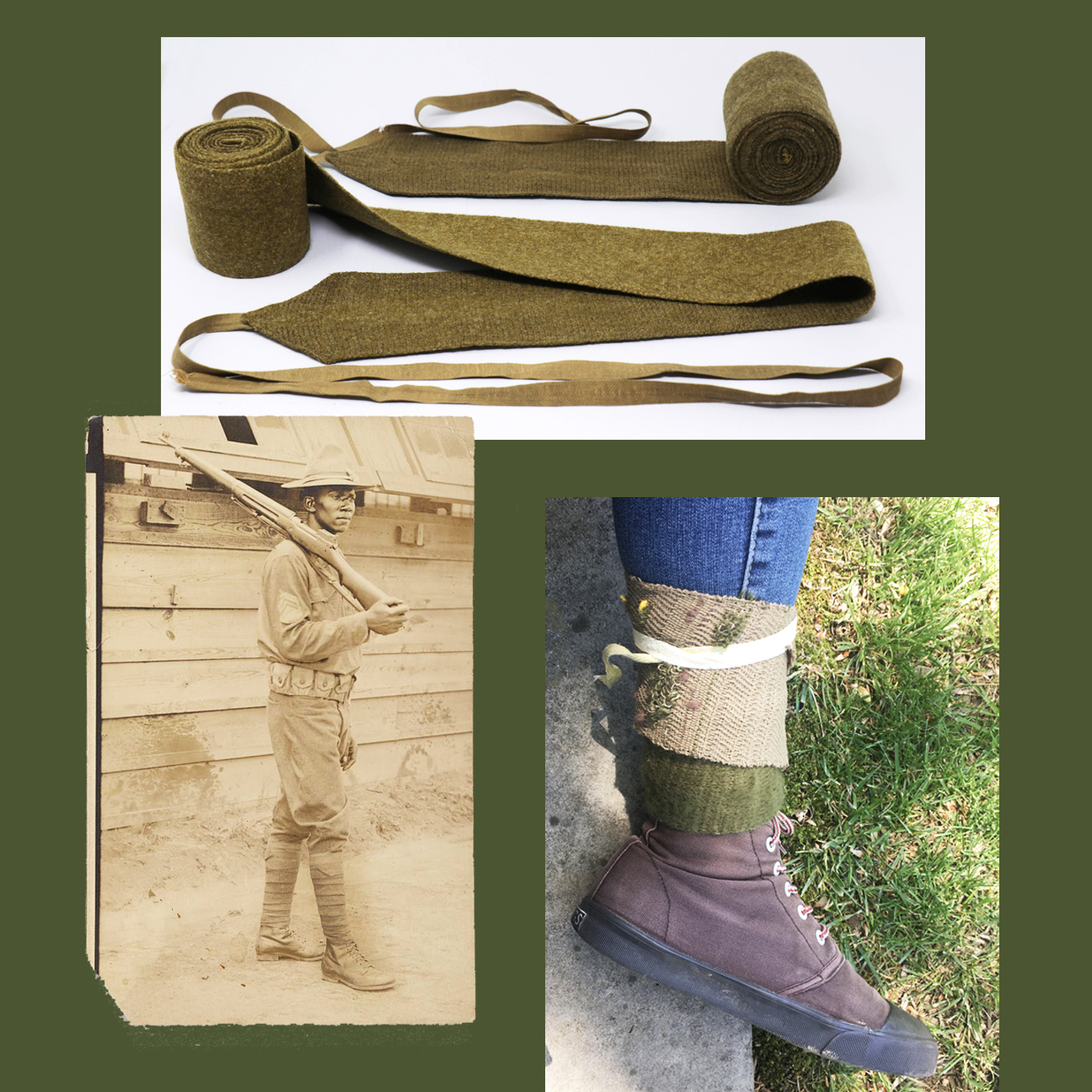 My name is Manasi Eswarapu and I am a senior textile design student at Thomas Jefferson University. I really love handweaving and have a strong interest in traditional South Asian handweaving techniques, though I would like to learn about traditional handweaving techniques from around the world. I also really enjoy working with kids and teaching. I would love to bring traditional art forms to kids in my community to add to a greater understanding of who they are and where they come from. Here’s a link to my website: https://www.manasike.com/

Prior to starting this assignment, I was interested in how textile traditions, techniques, and materials traveled the world. It’s easy to forget how fluid textiles can be with the labels we give them. What was so special about the puttees is that the name is a testament to its chaotic, shifting, unpredictable history. Puttee comes from the Hindi/Urdu word pattis (प ट /ﭘﭩﯽ) which means bandage. During the British Raj, the British army made various changes to their military uniforms to better adapt to their new environment. For example, khaki, also derived from Hindi/Urdu for dirt-colored, replaced the bright scarlet British uniforms to offer camouflage. Puttees, similarly, were native to British India and then adopted by the British army (Abler).

My original hope for this project was to find the original application of pattis and then recreate them. It became challenging to pinpoint the exact culture the British adopted the puttees from and what their original usage for them was. Though we know pattis means bandage, as it’s still used today, it can refer to many fabrics of different fiber types and structures. As stated earlier, textile history is fluid, and I believe that applies to all cultures. Unfortunately, there wasn’t much I could find other than they came from a Himalayan tribe.

One instance of puttee-like objects being worn that I found especially interesting, were by the Kohistan Rangers. These were men recruited from the Kohistan region of modern day Pakistan during the First Afghan War. The British wanted to gain Kabul as part of their empire but were unsuccessful and the Kohistani men eventually revolted against the British (Rattray). In the image below you can see layered cloth around their ankles and shins. This is just one possibility I found and I am unsure of whether it’s where the British adopted puttees from. It could be its own huge research project to find how they transferred from pattis to puttees.

The puttees in the Jefferson collection were part of an American World War 1 uniform. By the early 20th century, neutral colors such as khaki and puttees became the norm for Western military uniforms such as the American and British uniforms.

I wanted my redesign to reflect the history of this cloth in the World War and its South Asian origins. First, I had to examine the puttees in Jefferson’s collection. They are wool, olive drab, knit puttees. They are heavily felted making it difficult to identify the structure. I was able to look at them under a microscope in the Bruner lab. Through that process, we were able to identify a weft insert. This explained why the puttees had such limited stretch. So, for my recreation I used polyester and wool yarns in a knit milano structure with an inserted weft. To get a similar effect to felted wool, I brushed one side on my puttees.

For the second part, I leaned into the idea of camouflage in a more artistic way. I looked to the environments of modern-day Afghanistan where the British led various campaigns during the Raj and where Western imperialism has continued to devastate the native populations to this day. I chose a khaki base color and wove in green tufts to represent grass and bits of yellow to represent the Crocus korolkowii, a wildflower that grows in Central and South Asia (Crocus Korolkowii). A lot of military wear is designed to camouflage into the environments being fought in. I wanted the pattis to show the beauty of those environments despite the violence that has and continues to take place.

Special thanks to Prof. Janet Brady for helping us in the Bruner lab, Prof. Becky Flax, for helping me identify the knit structure, and Prof. Jade Papa for teaching this course and helping direct me towards solutions when problems arose.

World War One: Zelobes, France: Indian Soldiers Taking a Patient on a Stretcher from an Ambulance to the Dressing Station. Photograph, 1915. https://jstor.org/stable/community.24864381. Wellcome Collection. Accessed 16 May 2022.