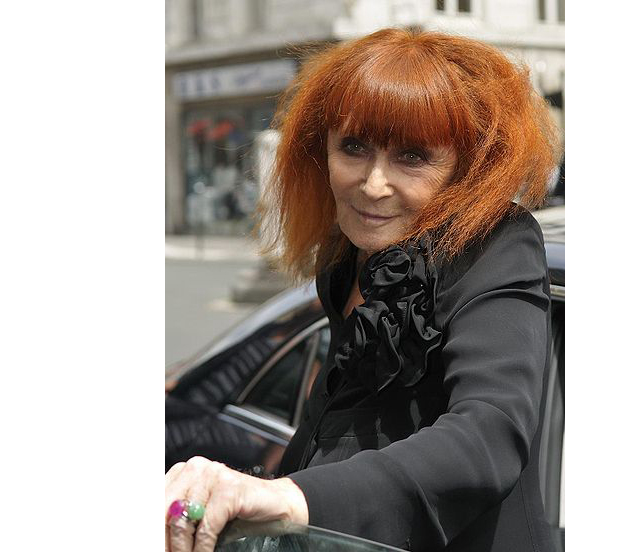 The Textile and Costume Collection is fortunate to count amongst its holdings a number of knitwear pieces from a designer dubbed the “Queen of Knits” by Women’s Wear Daily in 1968.

Although Sonia Rykiel claimed to know nothing about knits when she began (and in fact would never learn to knit), she clearly knew what women wanted.  The first sweater she designed in 1962 which she described as “very small and very tight…a bit androgynous, a bit tomboyish, a bit femme fatale – very mysterious and both unprovocative and sexually liberating,” landed on the cover of French Elle modeled by “It Girl” Françoise Hardy.

When Rykiel opened her first self-named shop in 1968, these finely ribbed, unpretentious “poor-boy” sweaters – as well as everything else – flew off the shelves.  She was still designing them in the 1980s as attested to by the jaunty sweater with the deep ribbed cuffs and cleverly knitted-in pocket we recently photographed from the Textile and Costume Collection.  Stripes – an iconic pattern in French design – would remain a signature of hers throughout her long and incredibly successful career.

Sonia Rykiel was born on May 25, 1930 in Neuilly-sur-Seine, northwest of Paris and at the age of 17 had her first opportunity to highlight her creativity with fabric and design when she worked as a window dresser in Paris.  Her career in fashion would truly begin when, after her marriage in 1953 and the imminent arrival of their second child, she was frustrated that she couldn’t find any suitable maternity clothes.  So, true to the spunky, “I’ll do it myself” attitude that would serve her well throughout her career, Rykiel made her own dress that flaunted, rather than hid, her pregnancy.

Rykiel’s pioneering, entrepreneurial spirit and desire to dress the modern woman would propel her success in an industry that lasted until her death in 2016.  In a New York Times article titled “Designers Reveal the Woman Behind the Fashions,” Rykiel remarked that she designed for the woman who is “…fragile, but strong.”  And, in a nod to the fact that she was designing clothes that she herself would wear, noted that, “[w]e are working women. Also, we have the problem of children, of men, to take care of our houses, so many things. I try to explain that in my clothes. They are clothes for everyday life.”

This ethos is on display in each of the ensembles designed by Rykiel held by the Textile & Costume Collection.

On my first encounter with this purplish-blue striped dress, I was both enamored and slightly perplexed – in particular by the exposed, raw seams seen at the side seams and the armscyes.  However, further research into Rykiel’s oeuvre revealed that this is another of her signatures.  With its relaxed fit and elastic waistband, this simple yet chic dress could easily become a go-to piece in a woman’s wardrobe.

Part of a three-piece knit ensemble, this sweater, featuring an embroidered patch that bears her logo on the sleeve, displays another nod to her native France: the red, white, and blue palette.  She’s given the woman wearing it the option of separates that can be mixed and matched in a multitude of ways with pieces already in her wardrobe or as a statement making ensemble when worn all together.

The staff at the Textile and Costume Collection has been diligently working over the last four months to photograph and document our extensive womenswear collection.  Many of these garments have never been available to view online.  Starting in January, photos and further information about these Rykiel pieces (along with many other designer pieces of the late 20th century) will be available for the first time in our digital collection.  We invite you to explore them all and admire for yourself the work of Sonia Rykiel  who received high words of praise from Jean Paul Gaultier (himself one of the great designers of the 20th century) in WWD: “[She was] a revolutionary designer.  I have great admiration for the work that she has done on liberating women and their fashion.  And she gave the inspiration and the style to all of us.”