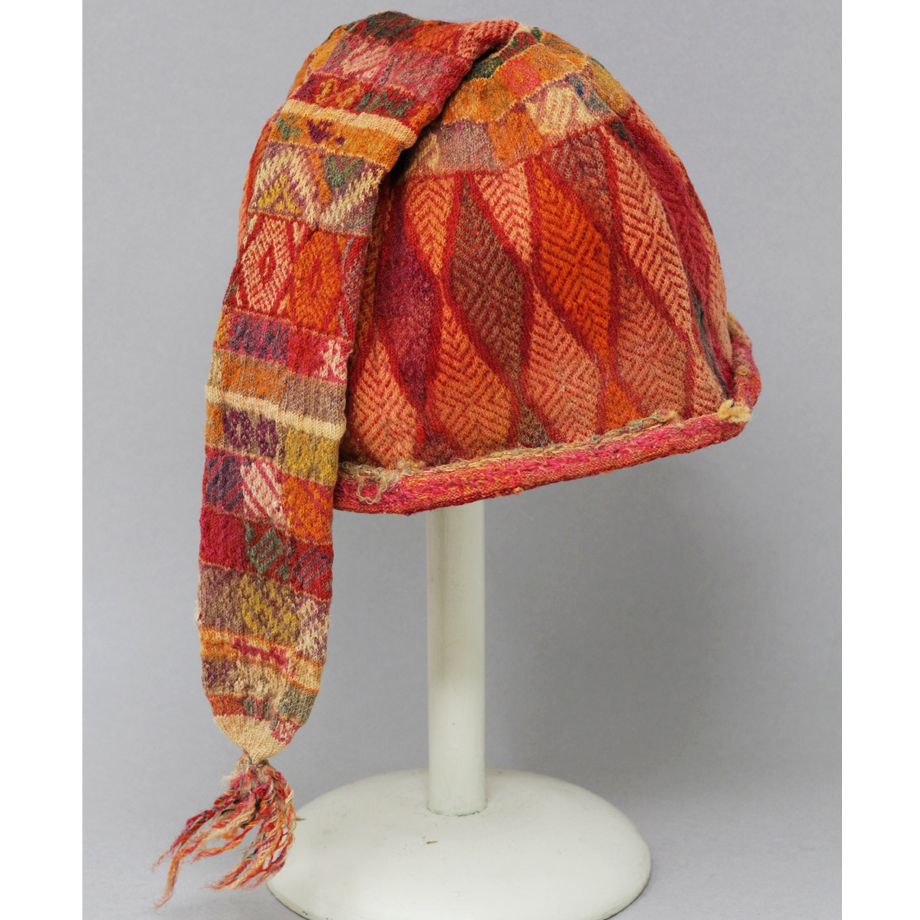 While working at the Design Center, I have been introduced to many interesting textiles that come from a variety of places. Recently, I have been focusing on South and Central American textiles from the early 20th century, specifically bags, hats, and belts. There are a variety of objects that were made by the people of South America, usually Peru, and Central America, primarily Guatemala.  Now they have a home at the Design Center and are able to be viewed by all.

Above are some photos of coca bags. Coca bags, also known as chuspas are made and used in the Andean region of South America – mostly likely in Peru or Bolivia.  The majority of the bags held by the Textile and Costume Collection are from the early 20th century, including the bag (1978.39.14) in the photo above. The bags were woven on a backstrap loom (like the one pictured below), usually with alpaca wool, that would be dyed in multiple colors for an artistic effect.

Chuspas are still woven on a backstrap loom. Women do the weaving by hand on this type of loom to create many different textiles and accessories. The backstrap loom consists of sticks, rope, and a strap that is worn around the weaver’s waist.

Another part of the collection are knit hats, also known as chullos. These hats were also made in the Andean region, usually from alpaca or sheep’s wool. These knit hats usually have designs that consist of geometric shapes, landscapes or animal motifs.

Moving onto another part of the South American collection, the next objects I inventoried were belts. Shown above are an assortment of belts created in Central and South America. As for the design, the belts are wide with the warp yarns twisted into tassels or braided together on either end. Some of the narrower pieces are likely hair sashes, called cintas.  These are most likely from Guatemala.  Both cintas and belts feature geometric designs or motifs of plants or animals.

Personally, I think the best part of the collection is being able to see how versatile individuals in Central and South America are in their textile creations. Interacting with these objects shows their weaving talent and their artistic side with the designs. The colors are beautiful and vibrant and draw the eye. The South American collection has so many objects to still research, photograph, and document. I cannot wait to share more information and interesting pieces that I find!

Curator’s Note: Our collection of Central and South American belts, bags, and hats are the newest digital addition to ArtStor and JStor.  Make sure to check out the beautiful pieces noted in Gabby’s post plus many more.

A Dorothy Liebes panel photographed against our gi

Dorothy Liebes giving us summer vibes with this lo

Loungewear by Chloé, featuring a slip and belted

This week on our blog, check out some stellar rese

Which would you rather swim in? A Pucci bikini fro