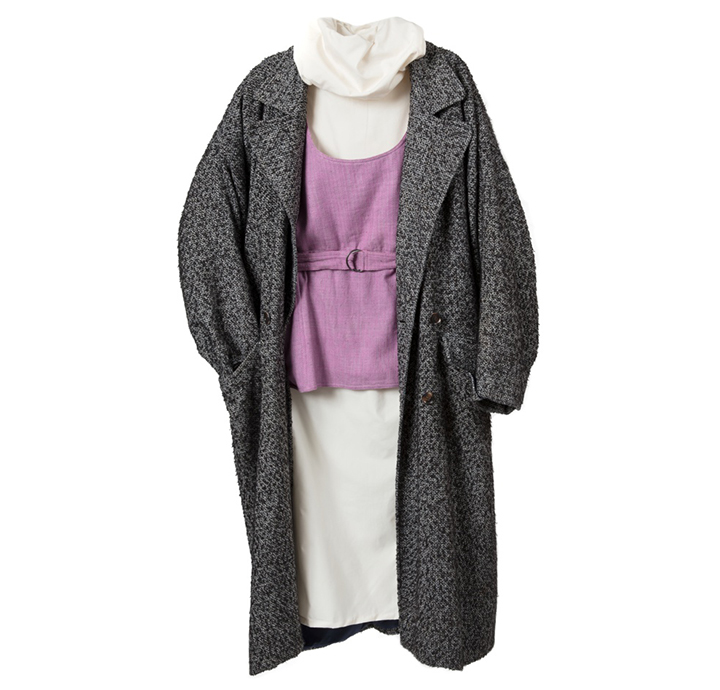 One question I’m frequently asked is if the objects of the Textile and Costume Collection go on exhibit.  Many East Falls, Manayunk, and Roxborough residents still remember the days when the Goldie Paley Design Center regularly welcomed guests through its doors for exhibitions.  Within the last decade or so, the focus of the collection’s use has shifted and the objects are now treated as a study collection.  In other words, our vast holdings offer the opportunity for students and faculty of Thomas Jefferson University and scholars from around the world to use our pieces for research and design inspiration.  So, while we do on occasion showcase objects at the Gutman Library or in small-scale exhibits at the Design Center, our floor-to-ceiling windowed galleries are now occupied by classroom and study spaces.

However, we do want as many people as possible to see the treasures we hold, so it’s always exciting to me when we’re approached by other museums asking to include pieces from the collection in an exhibit they’re planning.  In my opinion, this is a fantastic opportunity to foster the shared knowledge derived from placing objects in a larger context within an exhibition.  It also offers the opportunity to connect and collaborate with other cultural institutions.

All this is to say that I was thrilled when I received an email in the Spring of 2019 from Julie Pastor, curatorial assistant at the Cooper Hewitt Museum in New York City, wanting to know if we had any pieces by fashion designer Willi Smith.  Given his Philadelphia roots, she was hoping we might have some pieces they could use in their upcoming exhibition.  A quick search of records and a fleeting memory I had of seeing a WilliWear label lead me to a rack of clothes where I found a light purple jumper and a striped button-up shirt.  The original file for the objects was pretty scant; no donor information and a note that the garments were purchased at Wanamaker’s.  I replied to Julie with these details and plans were set in motion – they’d love to include these pieces in Willi Smith: Street Couture.

The Cooper Hewitt’s exhibition on Smith runs through October 25th.  Their website offers an in-depth look at most of the items displayed in their galleries and a resource they’ve dubbed the Community Archive chronicles the memories and contributions of Smith’s friends.  It is well worth spending an afternoon immersing yourself in their resources where you can re-discover or discover for the first time a man considered one of the most successful African American fashion designers in the industry.

Smith was born in 1948 in Philadelphia, and after a period of ups and downs – an internship with well-known designer Arnold Scaasi, a short stint as a student at Parsons, collaborations with numerous experimental artists, and the launch of WilliWear, Ltd in 1976 – he would win a Coty Award and boast $25 million in annual sales.  According to the Cooper Hewitt’s website, “Smith hoped to solve what he called ‘the problem of getting dressed,’ or the lack of control fashion afforded the everyday person, by using clothing as a tool for the liberation of stereotypes around race, class, sex, and gender, and bringing art into the mainstream.”

In terms of the physical design of Willi Smith: Street Couture at the Cooper Hewitt, the curators and designers’ vision involved recreating the essence of Smith’s NYC 5th Avenue showroom.  As a result, garments like our jumper are displayed on hangers combined with other pieces to create an ensemble.  After extensive research, they determined that our jumper was part of Smith’s 1984 SubUrban collection and so it’s paired with other pieces from that collection.  The dress seen underneath was recreated from one of Smith’s sewing patterns, and the coat is one of a number of objects on loan to the museum from Smith’s brother, Norman.

Willi Smith is among the designers I’ll teach in my 20th Century Fashion Designers course this Fall.  I’ll utilize the extensive research drawn together by the Cooper Hewitt’s curators to paint a picture of Smith’s career alongside students’ observation of his craft and aesthetic as they examine the WilliWear pieces we hold.  Having tangible objects to examine and inspire is the heart of what we do at the Design Center.

Further reading on our involvement with the exhibit: Brian Hickey.  Hidden Gem From Jefferson Design Center in High-Profile NYC Exhibition.

Further reading on Smith:  Jenny Comita. How Will Designer Willi Smith Be Remembered?

All images in this post courtesy of Cooper Hewitt Smithsonian Design Museum.